The idea of a Rx free mammograph for breast cancer detection

Topic of the seminar: prevention in health care

What is cancer prevention?

The idea of a Rx free mammograph has been developed by Ubt Srl and specifically by microwave imaging and mechatronics experts. The new technology resorts to the following scientific discovery: it is possible to use the microwave frequencies to perform breast imaging. Microwave frequencies are for example the signals which wi-fi and mobile phone technologies utilize.

This technology is exploiting the dielectric properties of human tissues, which show a high contrast between healthy and malignant tissues at microwave frequencies. So the experts found they could generate an image of the breast by using such contrast.


Let us consider a breast illuminated by transmitting antennas and assume that the receiving antennas measure the signals at the surface of the breast. Is it imaginable to reconstruct an image of the breast, highlighting possible inclusions inside it? If we use microwave signal processed through an appropriate imaging algorithm, we can respond to the question in a positive manner. Specifically, microwave allows internal imaging. That means we can generate a digital signal representing a non-integrity of the mammary tissue.


Also, this mammograph doesn’t require any breast crushing and the patients are in a confortable prone position during the breast test.
Project steps


After the filing of the patent, which is now granted, Ubt Srl has built a strong relationship with the Department of Physics, University of Perugia, Italy;

The clinical validation started in February 2016 and is going to finish by the end of 2017; 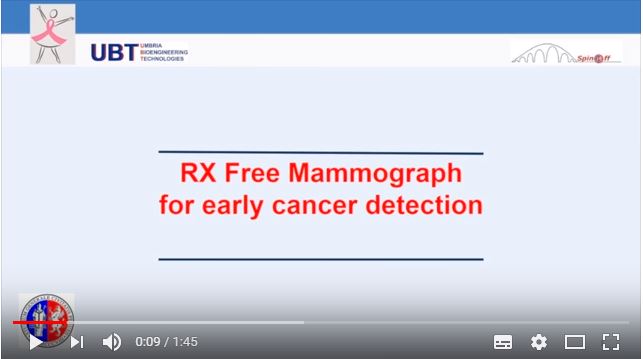 In March 2020 our Mammowave was installed at the S. Martino Hospital in Genoa

July 2020: confirmation of the registration of our UK branch